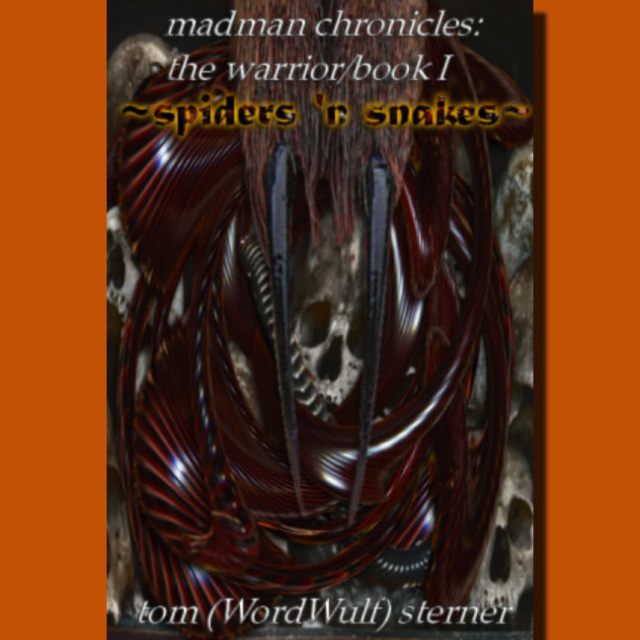 Spiders ‘n Snakes is the opening chronicle in the saga, Madman Chronicles: The Warrior. Dragon riders gather to bury the dead at the culmination of a five-year apocalyptic world war. And the dead are many. They fill vehicles and buildings in every stage of decomposition. They’re steam-shoveled into piles, dumped into manmade canals then set on fire.

War refuses to stop, driven by monsters from the top. Wulf, Leader of Lords of the Dragon, an armed and mounted society of warriors, descends into the earth on a mission to discover a place to take his people, where they might enjoy life with their families and finally be rid of the manifest destiny shoved down their throats by prevailing world governments.

His people are comprised mostly of the lower echelons of society, minorities, 1%er outlaws, the poor and insignificant. They are the ones who fight wars and, in the case of The Great Conflict, have paid the blood and guts price when politics got out of hand and the wiggly wobbly top spun into chaos. Having survived the war, they recognize a tiny window of opportunity.

So Wulf ventures into the labyrinth, a torturous system of tunnels and chambers deep in the earth. There he faces mutant creatures, the horrifying discovery of an underground arena used by a society from the past to commit atrocities including suicide by lottery, human sacrifice and infanticide.

When he escapes the labyrinth, Wulf goes into the city as part of a commission to consider a treaty offered by the government. He faces the unfeasible intrigue of allies and authors of treaties. Nobody in the room senses the climber pounding through the earth. Wulf blabbers and drools, makes a fool of himself in a room full of neckties, to battle the assassin and block its way. The steppenwulf aspect of himself, the vampire he denies, slams him down to save his man self and explodes into action.